Giulia Monducci, born in Italy, graduated with a BA in Music from the Media from the “G.B. Martini” Conservatory of Bologna, a BA and MA in Composition from the Royal Conservatory of Brussels. She is a freelance composer and a PhD candidate in Composition at the University of Oxford. In the past few years she’s carried out research on the integration of metaphorical thought and perception in contemporary music, focusing in particular on how the metaphorical conception of ‘space’ relates to matters of sound and temporality. Giulia’s music has been performed internationally at venues such as the ABC Iwaki Auditorium (Melbourne), La Monnaie (Brussels), LaGuardia Performing Arts Center (New York), Lviv Philharmonic, Sheldonian Theatre (Oxford), Schönbrunn Palace (Vienna), among others.

During my stay at Co.iki I am going to work on a cycle of ensemble pieces drawing from Japanese aesthetics. This project stems from my doctoral research on the relationship between the concept of ‘space’ and matters of sound and form in contemporary music. Each piece in this cycle will take specific places, concepts (e.g., mujō) or art forms (e.g., Noh Theatre) as sources of inspiration, and will explore the relationship with elements, images, and movement in connection to music. This project was born from a long time interest for Japanese culture and conceived with the intent of expanding my artistic practice while deepening the study of Japanese culture, music and traditions. 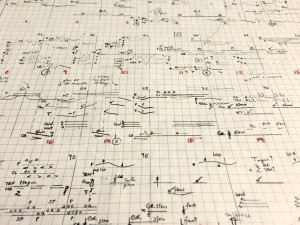 A sketch of the ensemble work 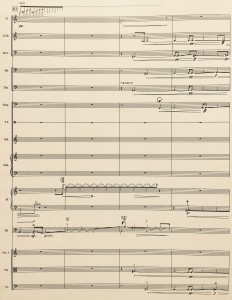